I’m not sure where, but I seem to remember hearing that Arsenal and Adidas were thinking of returning to the maroon kit that was used – created by Nike – during the last season played at Highbury in 2005/2006.

With that, I decided to have a go at making my own kit, made by Adidas, that used the same colour.

I’m not a huge fan of collars myself but understand that if Arsenal were to return to a kit that showcases their heritage, there would need to be some sort of historical call-back. Adding to that, I didn’t want the kit to look too similar to the 05/06 shirt so I thought a subtle pattern, calling back to the classic Arsenal crest used before the 2002 rebrand would both look good and go down well with fans.

Without further adieu, here’s what I came up with…

The design of course build on the 05/06 strip, but replaces gold details with white, which I think pop more and contribute to a cleaner design.

As I mentioned earlier, I’m not huge on collars (unless on a yellow and blue Arsenal away kit) and the crew neck teamed with the pattern and one-tone crest creates an elegant, classic-yet-modern shirt. 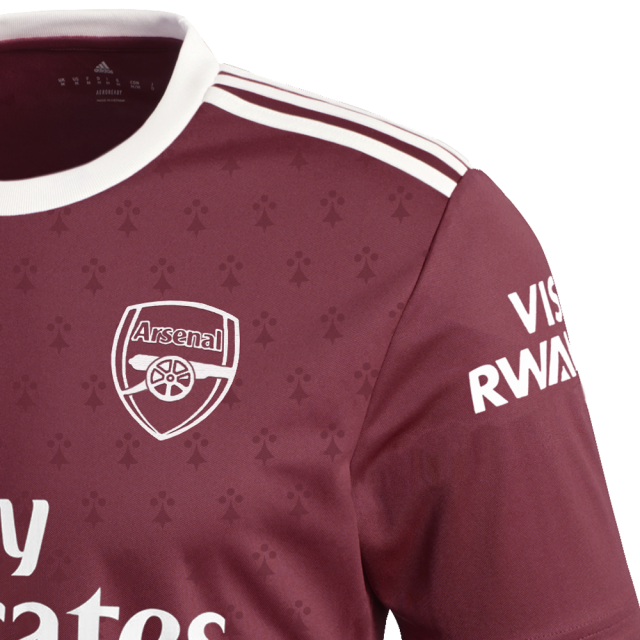 The pattern is made from an only slightly darker maroon, making it only visible in some lights, with the sleeves remaining a block colour.

I did initially dabble with making the sleeves white, but things ended up looking just a bit Burnley, which you can see below…

I also had a go at making all of the details – including sponsors – a similar maroon colour which, while I enjoyed the look, I imagine wouldn’t be approved by sponsors or manufacturers.